You’ve Got to be Kidding me

"You've Got to be Kidding Me"

Farming Life Lesson: You can only plan for so much. Be prepared for anything.

Let's pretend for a second that you get the courage to try something new.  You decide to start your very own meat goat operation.  You're ready to learn and grow your farm, but the curveball that follows was never even a thought in your mind!

Josh Betcher, owner of JB Farms, shared with a group of students from the Integrated Arts Academy about how his operation grew almost overnight with little preparation in place.

In January 2021, Farm Camp Minnesota connected a horticulture class and culinary arts class to JB Farms.  A few years prior, wwners Josh and Sara Betcher had a few goats that they added to their farm to be used for 4H Goat Showing.  Their farm started with crops and they decided to add a herd of meat goats in the fall of 2020.  What they didn’t know was that their original herd of 100 was going to grow much faster than expected!

In his introduction to his goat operation, Josh explained that they purchased 100 goats from a farm in Texas in September 2020.  They made sure to get goats at 2 different ages so they could plan out their breeding schedule (50 goats born in 2019, 50 goats born in 2020).  It was their plan to breed half of their herd to start kidding (or having their baby goats) in the spring of 2021 and the other half to kid later that summer.

Well, as we all know, 2020 was the year of the curveball! Josh and Sara found out about a few weeks after their goats arrived that they had little ones on the way!  You can only imagine their surprise when they learned that their goats would be kidding during Minnesota’s coldest months of the year!

Time to pivot!  Josh shared that there was no time to think about what to do, instead, they just had to act.  They first called up the vet to check out which goats were bred and when they would be due. They decided to use Josh’s shop to house their birthing pens because those babies would need heat if they were going to survive the winter. They improvised 3 birthing pens with heat lamps, hay and a camera system to monitor the mamas and babies.

Watch as Josh shares about his kidding shed

At the time of the Farm Camp tour, Josh and Sara had about 25 goat kids gallivanting about in their cozy new home.  The kids were separated into 5 different pens based on their ages, some with their moms and others who had been weaned already.  All unbred goats were organized together in the outdoor pen with a lean-to roof and plenty to play around on.

Fun Fact: Did you know that Male Goats (Bucks or Billies) make themselves “extra fragrant” so that females are more attracted to them? Yep! That’s right, the smellier the better! The Betchers own 2 males that will be used for breeding. They are named Kelso and Fes (for any That 70s Show fans out there).

When asked what their favorite part of the tour was, students overwhelmingly said “the babies!”

“It was so cool to find out how they care for their animals,” one student shared when asked about their favorite part.

Farm Camps work to connect students to the real story of agriculture and the people behind the job.  Josh not only shared about his family’s role but also the role the veterinarian and nutritionist play in keeping the animals safe and thriving.

Not only did the Integrated Arts Academy students learn the details of raising meat goats and the careers behind their operation, but also the incredible life lesson that you can make a plan but things don’t always go to plan!

Want to work with Farm Camp to create an immersive experience for your students? Educators click here! 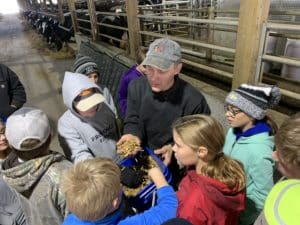 You may think students make connections from their food, furniture and local landscape that agriculture is important in their lives. We’re finding those connections are getting lost and we want to help students build those back so they can value the world around them. Teachers asked, our investors answered For the 2022-2023 school year, we have Transportation Grants available; made possible by our incredible investors that heard of this need to support bus transportation […] KDE Farms Gives Hands-On Tour to St. Paul High School Students What do you get when students step off a bus onto a farm for the first time ever? Questions. […] 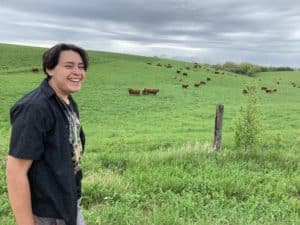 Cattle is cattle, right? Metro students from a St. Paul High School quickly realized that cattle farming in Minnesota is very diverse which they attended this Farm Camp MN Experience. 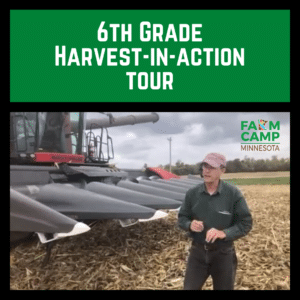 “Come on up kids!” 6th graders virtually jump into the combine for harvest

Farmer Bruce Tiffany gives students a behind-the-scenes tour of harvest on October 7, 2021. What happens when 200 students… “You never know when you’ll meet someone, who with one conversation, will set up the trajectory of their life because you shared your story.” After a fun-filled Farm Camp focused […] You’ve Got to be Kidding me

“You’ve Got to be Kidding Me” Farming Life Lesson: You can only plan for so much. Be prepared for anything. Let’s pretend for a second that you get the courage […] 5 Lessons learned from our Pilot Programs

Before fully launching Farm Camps to all educators, we started with 4 pilot programs. We learned a few lessons that helped us to now best serve our educators, students and […] What Does a Student Experience During a Farm Camp?

There are 3 main parts to a Farm Camp Student Experience. Learn about how students grow their knowledge on a specific ag industry inside and outside of the classroom.